AVAILABLE IN LONDON AND HOME COUNTIES

An evening of fun with a FUN HIGH ENERGY approach

SEE THE VIDEO BELOW, listen to the great MUSIC—

YOU CHOOSE THE MUSIC!!!!

Dances are simple- IDEAL FOR THOSE WITH NO PREVIOUS EXPERIENCE

From Wikipedia, the free encyclopedia

Jump to navigationJump to search 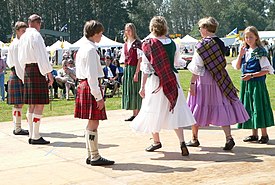 Scottish country dancing at the 2005 Skagit Valley Highland Games in Mount Vernon, Washington, US. Tartan sashes should not be pinned to the right shoulder in Scottish dance, unless one is a chief, regiment leader, or spouse of the aforementioned.[1] Despite this protocol, some dancers in England and America do not follow the tradition.[2]

Scottish Country dance (SCD) is the distinctively Scottish form of country dance, itself a form of social dance involving groups of couples of dancers tracing progressive patterns. A dance consists of a sequence of figures. These dances are set to musical forms (Jigs, Reels and Strathspey Reels) which come from the Gaelic tradition of Highland Scotland, as do the Steps used in performing the dances. Traditionally a figure corresponds to an eight bar phrase of music.

Country dancing which is arguably a type of folk dancing, first appears in the historical record in 17th century England. Scottish Country Dancing as we know it today has its roots in an 18th century fusion of (English) country dance formations with Highland music and footwork. It has become the national ballroom dance form of Scotland, partly because “Caledonian Country Dances” became popular in upper class London Society in the decades after the rebellion of 1745. [3]

When it first became popular around the 18th century it was as a shorter, quicker form of dance[citation needed] that was a light relief from the more courtly dances normally danced.[3] Derived from early British forms of Country dancing, SCD is related to English country dancing, contra dancing, cèilidh dancing, Old time dancing and Irish set dancingdue to the combination of some of these dance forms in early Country dance forms[3] and later cross-over introduced by their overlapping influences via dancers and dance masters.

Scottish country dancing (a social form of dance with two or more couples of dancers) should not be confused with Scottish highland dance (a solo form of dance). There is a certain amount of cross-over, in that there are Scottish country dances that include highland elements as well as highland-style performance dances which use formations otherwise seen in country dances, but these are relatively few when the two dance forms are considered each as a whole. 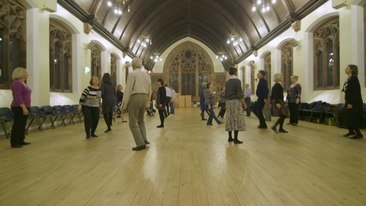 Scottish country dances are categorised as reels(including hornpipes), jigs, and strathspeys according to the type of music to which they are danced. The first two types (also called quick-time dances) feature fast tempos, quick movements and a lively feel. The third type (strathspey) has a much slower tempo and a more tempered, stately feel. Although general guidelines are given below almost all elements of SCD have exceptions through the playfulness of the dance writers to the wide variety of influences and interpretations over the years; some exceptions include the Eightsome Reel (has two parts repeated as ABBBBBBBBA and is thus considerably longer than most other dances), The Wee Cooper of Fife (ten bar phrases—with music to match), The Willowtree (often only repeated four times despite having eight couples because the dance is mirrored from both ends of the set).

Scottish country dancing is generally danced in organised formations referred to as “sets”. Sets consist of three or more couples, usually four but sometimes as many as eight. A couple is formed of two dancers referred to as the “man” and the “lady”, however, due to the much larger number of women dancing SCD compared to men, women often dance “as the man” (normally the more experienced woman will dance as the man or, all else being equal, the taller woman will dance as the man as some figures are easier this way).

The usual set shape is “longwise” – each man opposite his partner with all the men in one line facing a similar line of women. The leftmost man and his partner are called the “first” or “top end” couple and sets are generally formed such that first couple is closest to the stage with the band, CD player, or other source of music. Other shapes of sets include triangular sets (three couples on the sides of a triangle, this is fairly rare), square sets (four couples on the sides of a square) or square sets with extra couple(s) in the centre; these are much less common though some of the most popular dances in Scotland use these formations. When the set is not longwise then the lady starts the dance beside her partner with him on her left.

Scottish country dances are made up of figures of varying length to suit the phrasing of Scottish country dance tunes. For the most part figures are 2, 4, or 8 bars of music long. There are various kinds of figures ranging from the very simple (e.g. a couple changing places across the set giving right hands) to fairly intricate convolutions involving three or four couples at the same time (e.g. three-couple rights and lefts). Dances are generally made up of eight bar phrases with a single “time through” lasting between 24 and 64 bars and repeated as many times as there are couples in the set. Some dances are only performed a single time through however these normally last between 96 and 160 bars (e.g. Bonnie Anne, MacDonald of Sleat).

Dances are described by their music type, length and number of repetitions. A strathspey which has a “time through” of 32 bars and is danced 8 times will be described as “an eight by thirty-two Strathspey”, the written form will often be shortened to 8×32 S to fit on a dance card or programme.

Unlike cèilidh dancing or English country dancing, which are usually done using walking or running steps, Scottish country dancing uses different steps according to a dance’s choreography (although most people in Scotland use the terms ‘cèilidh dancing’ or ‘country dancing’ interchangeably, with ‘county dancing’ often being taught in schools and later used at ‘cèilidh’ events). Travelling steps include the skip-change of step in quick-time dances and the Strathspey travelling step in strathspey time, while setting steps include the pas de basque in quick time and the common schottische/Strathspey setting step in strathspey time. Some dances also involve setting steps from Highland dancing, such as the rocking step, high cuts, or Highland schottische. In quick time, there is also the slip step for quick sideways movement, e.g. in circles.

In SCD classes there is often a certain focus on “correct technique”, this applies especially to footwork and the positions of the feet at various points during the steps. Well-executed steps improve the look of a dance greatly, however their mastery involves quite some time and dedication and also a certain level of physical fitness, this does not mean a segregation of dancers is necessary however though it can lead to this due to the social nature of the dance. In many places the main object of SCD is having fun, with or without the requirement for good footwork, in other places there is a preference for only those dancers with better footwork to join the dance, this is most prevalent in demonstration level classes and performances where a desire to impress the audience is the utmost concern.

A much more important aspect of good SCD technique is for a dancer to ensure that they are at the proper location at the proper time. This is important because the figures often require many of the participants to be correctly achieved therefore it is difficult for the whole set to complete a dance if more than one or two dancers do not know where they should be when. “Phrasing” is the execution of figures appropriately timed to the music. “Covering”, another common term, calls for moving dancers to progress in unison, this forms lines, squares etc. that last for only a second but which are clearly visible to an audience watching a dance (and often to the dancers themselves). Many SCD groups like putting on demonstrations to display the best dancing ability of the group.

Principally SCD is a social dance. Interaction with a partner and the other dancers (e.g. smiling, verbal cues, giving hands, encouragement) is an essential part of SCD. SCD is very much a team effort, although there is disagreement as to the importance of couples within this and how the adding of embellishments, differing choreography or ways of correcting mistakes during a dance should be handled. As with all social situations this varies by community and occasion and is largely viewed as generating a healthy dialogue between communities.